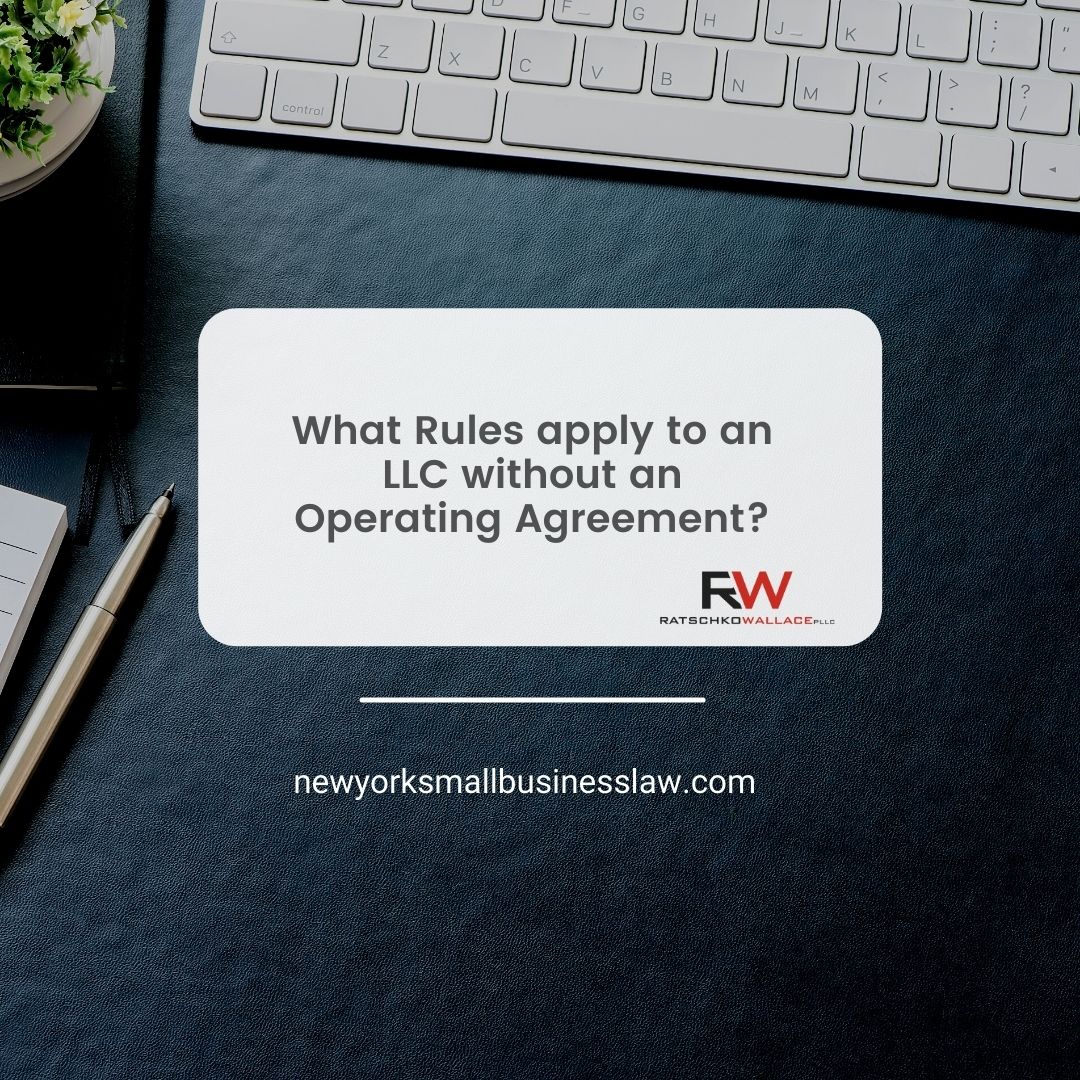 LLCs without an Operating Agreement

Let’s look at what happens when you do not have an operating agreement.  Maybe that will teach you to invest the money into having a proper operating agreement drawn up by a qualified lawyer, such as myself.  Contact me anytime to discuss your situation 212 253-1027.

LLCs without an operating agreement are governed by the New York limited liability company law.

Under this law, the following rules would apply to an LLC and its members:

(Let’s assume the LLC  is managed by its members and has 3 members, Joe, Jane and Jessy)

Each member can Enter into Contracts

Either one of Joe, Jane and Jessy can enter into (most) contracts for the LLC and legally bind the LLC without asking the other two members  §401(a) of the LLC Law.  For example, Joe could sign a lease in the name of the LLC and not involve Jane and Jessy in that decision.  However, each member can only act for the LLC to the extent it is  “for apparently carrying on in the usual way the business of the limited liability company”, see Section § 412 (a) of the LLC Law.  So doing something that is clearly outside the day-to-day business LLC, like hiring a law firm, selling the assets of the LLC, or hiring employees if the LLC never hired one before, is most likely not authorized and the other members would have to consent.

Voting Rights and Distribution of Profits can get messy

Each member’s voting rights and rights to distribution of the LLC profits would be determined on the basis of the value of their contributions to the LLC as stated in the LLC’s records §402(a) LLC Law, § 504.  Assuming again that Joe, Jane and Jessy probably also didn’t keep records of the value of their respective contributions, one would have to determine the value of each member’s contribution.  How much value can you put on that web design contributed by Joe compared to the cash pumped into the LLC by Jane and Jessy?  This can get messy and a breeding ground for conflict.

Continuing with the above assumptions,  Joe and Jane could decide to outvote Jessy and welcome Betty as a new member in the LLC without the consent of Jessy  § 402(c)(1).

Joe and Jane could dissolve the LLC without the consent of Jessy § 402(d)(1).

Joe and Jane could decide to sell all of the assets of the LLC without the consent of Jessy § 402(d)(2).

Joe, Jane or Jessy cannot withdraw from the LLC prior to the dissolution of the LLC   § 606(a).

Joe and Jane could decide to enter into a binding operating agreement for the LLC without the consent of Jessy. 402(c)(3)

No Expulsion of Members

Now, even with a majority vote, neither member can be involuntarily expelled from the LLC, no matter how egregious the behavior.  Nevertheless, Joe and Jane could adopt an operating agreement without the consent of Jessy and that operating agreement could contain provisions providing for the expulsion of a member for misbehavior.

If the operating agreement of your New York limited liability company is silent on the subject, there is no law in New York that allows you to expel another member, no matter what he or she did to you or the business.  You are stuck with that member.

Thus it may make sense to adopt an operating agreement that has provisions about member expulsion.

In case a member behaves really badly, the LLC can make that member leave, possibly forcing him to accept a buyout, on terms relative to the wrong he or she committed.

Great care is necessary in drafting these provisions.  If misbehavior is drafted too broadly, everybody will walk on eggshells in order to avoid expulsion or a group of members may conspire against another member to make him/her inadvertently break the rules.

First, what are the grounds for expelling someone?  Some of the options are: Failure to provide the services they promised; loss of professional license necessary to be a member of the LLC, such as in a professional LLC; a serious breach of confidentiality or other material rules of the operating agreement.  And so forth….

Second, there has to be a provision that states when the expulsion is triggered: A Vote of the members? What majority is required?  Is the member who is being accused of wrongdoing excluded from voting?

Third, what are the consequences of an expulsion?  The member could be excluded from voting and just remain with an economic interest, which means he/she receives distributions but cannot participate in the management of the business; He/she could be forced to sell his/her full interest, but on what terms and what is the valuation procedure?

The Majority can Freeze-Out Minority Member

Any two of Joe, Jane and Jessy could decide to get rid of the third member by orchestrating a so-called freeze-out merger.  They vote to merge the LLC into a new entity.  Upon merger, the old LLC disappears and only the new entity survives.  In doing so they have to adopt an agreement of merger that could provide that the third member will not be an owner of the new entity after the merger and instead will just receive the value of their former interest in the LLC.  The ousted member’s only right to object to this treatment is to ask for an appraisal.  The appraisal then determines whether the ousted member actually received the correct value for their LLC interest.  See also, “Cash Out Merger, the totally legal way to get rid of a minority member“

Do not go without an Operating Agreement

Long story short, it is really a very bad idea to be a member of an LLC without an operating agreement, especially as a minority member.  As you’ve seen above, a minority member can be pushed around and even kicked out via the freeze-out merger.